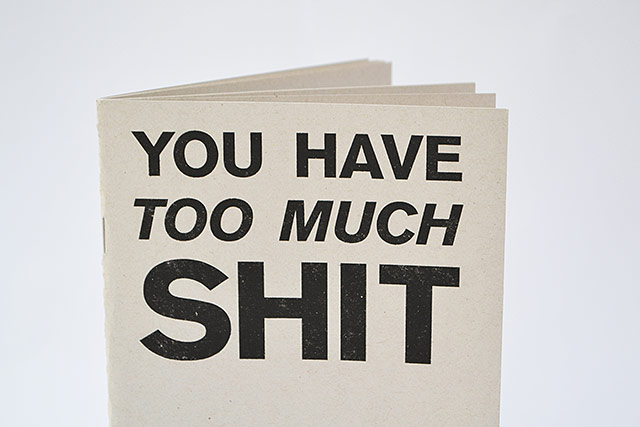 Earlier this year, I published a tiny self-help book. It?s called ?You Have Too Much Shit,? and is intended as a short, sharp kick to the nuts of the materially well-endowed. I?m not into self-help books. I certainly never thought I?d write one. But the subject of our obsession with material things is something I have become more and more preoccupied with.

As a designer, I spend a lot of my days trying to refine things and remove unnecessary details ? and that slightly obsessive nature has inevitably spilled out into the rest of my life. I?ll admit I was never much of a hoarder to begin with, but as my design practice became more sophisticated, my rationale for keeping and getting rid of my possessions did too.

Before I wrote ?You Have Too Much Shit?, I hadn?t even heard of the tiny house movement ? maybe the odd Vimeo fragment of bearded loners in huts had reached me, but no sense that there was a movement. And I guess my book has been picked up by and appreciated by a number of these interlinked movements: tiny houses, tech nomads, de-clutterers, neo-minimalists? The response has been deeply heart-warming, and filled me with a renewed optimism in the future.

As with any nascent countercultural movement, there are dangers. We have become adept in using the slick visuals and language of consumer commodity fetishism in order to promote our cause (a la Minimalissimo) ? but must be careful we do not end up creating just another class of consumer. These things have to stay as movements: communities of people sharing knowledge and resources with one another.

Minimalism is about more than just aesthetics. In an uncertain future, movements such as Tiny Houses can be models of how to live more humbly, but we must remember not to become slightly-more-deserted islands.

Get a copy of You Have Too Much Shit

Or throw some bones at a real life book here.